A clash has broken out between student protesters calling for safer roads and Awami League activists in Jigatala, near the party’s offices in Dhanmondi. 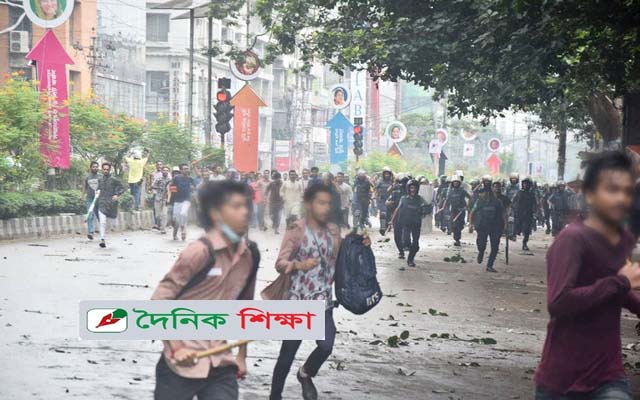 The clashes began on Saturday afternoon. A group of men wearing motorcycle helmets—some of them armed—arrived later on the scene and clashed with the students. A bdnews24.com reporter saw two motorbikes going up in flames after an arson attack.

Earlier, a confrontation took place between the students, who are holding citywide protests, and Awami League activists in front of the party president’s offices at Dhanmondi 3/A around 2pm.
“The trouble started when a group of the protesting students went towards the party offices,”  told a tea vendor.

The students then retreated to the Star Kebab restaurant on Dhanmondi-2.

Around 5pm, a group of the helmeted men were seen throwing brickbats at the students who gathered by Star Kebab. The reporter saw one of them discharge a firearm.

Some of the students were throwing brickbats at the attackers and had makeshift weapons in their hands.