Bangladesh general students’ rights protection council, a platform that leads the quota reform movement, on Sunday demanded reformation of quota system in civil services in the light of their five-point demand. 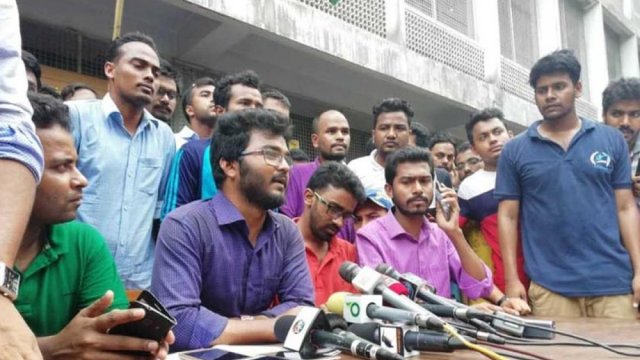 Hasan Al Mamun, convener of the platform, announced their demand at a press conference held in front of Dhaka University (DU) central library at 11.30 am.

The move came at a time when the government just recent published gazette abolishing the quota system from 9th to 13th grades (1st class and 2nd class) of government jobs.

The students’ rights protection council’s five point demands include: reducing the quota from 56 per cent to 10 per cent, filling in the vacant positions from the merit list if eligible candidate is not found from the quota, and limiting the use of quota privilege.

He said, "We think some quotas are required for indigenous, physically disabled and underprivileged freedom fighters."

Mamun also demanded withdrawal of cases filed against students for waging quota movement. "All fake cases against the students must be withdrawn and the attackers who assaulted the students during the movement should be punished," demanded Mamun.

Faruk Hossain, a joint convener of the platform, said, “We take the government decision positively. But we are not satisfied; because we always wanted quota reformation not its abolishment."

Some other leaders including its joint conveners Nurul Huq Nur, Rashed Khan, Mashiur Rahman were present in press briefing.