Education Minister Dipu Moni on Thursday said the government is working sincerely to wipe out corruption from all sectors, including education. 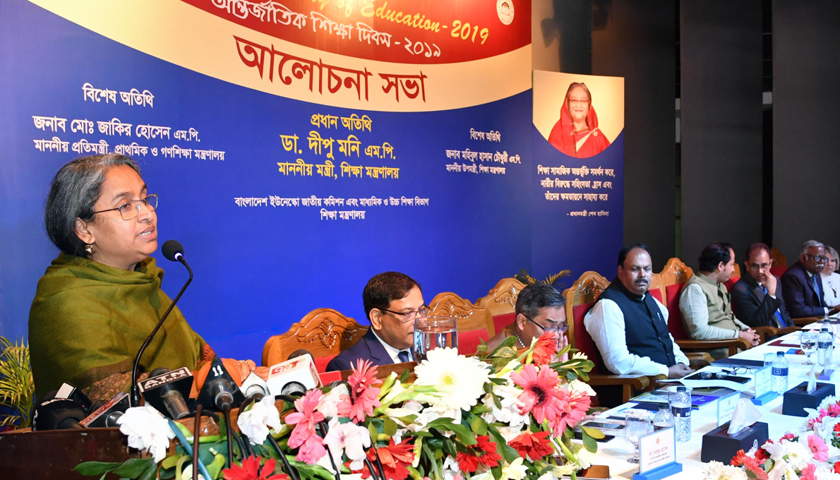 “We’re moving forward, we’ve many aims. Eliminating corruption from all sectors, including education, is our election pledge. The government is working on it,” she said.

The minister came up with the remarks while speaking at a discussion programme marking the International Day of Education at International Mother Language Institute (IMLI) in the city. The programme was jointly organised by Bangladesh National Commission for UNESCO (BNCU) and Secondary and Higher Education Division (SHED). Dr Dipu Moni was present there as the chief guest while State Minister for Primary and Mass Education Ministry Md Jakir Hossain, Deputy Minister for Education Ministry Md Mohibul Hassan Chowdhury as special guests.

The Education Minister said the government is working for introducing an inclusive education where every children, including ethnic or physically-challenged ones, get equal facilities.

“We’ve much success in education sector in the last 10 years. No other government could achieve much success like that of Bangabandhu’s daughter,” she said.

The minister also called all officials of education-related ministries to perform their duty properly from their respective positions to reach their goals. “I would like to tell all the guardians that raise your children as a good human being alongside a good student. They should be self-confident, open minded and aware about the Liberation War,” she said adding, “If we lead the life with integrity, then there’ll be no need for any anti-corruption drives.”